Admitting that I don’t know and/or don’t understand something has often times felt like defeat. As someone who has always strived to do and be better, not knowing or not understanding something and/or someone perplexed me even further (if such a stance is possible). So when I came across this quote on July 12th, just three days after my therapist introduced the concept of a Don’t Know Mind to me on July 9th, I felt as if divine intervention had just taken place within my spirit.

Let me back up for a minute and try to explain this idea of the Don’t Know Mind. According to Zen Master Bon Soeng, “We want to know, we think we know, we think we’re supposed to know. There’s all of this bias toward knowing. But we don’t really know.” The basis of the Don’t Know Mind is this radical idea that we admit the truth: the fact that we don’t know (something and/or someone) and move forward from there. This posture of “Don’t Know” doesn’t scream to the universe that we are incompetent, but that we are open to knowing; we wonder; we seek to be informed rather than assuming we already know.

“A beginner’s [novice’s] mind is wide open and questioning. An expert’s mind is closed”—Suzuki Roshi

Soeng went on to note that, “We fill our minds up with all this stuff, and it gets stale and dead. Not knowing is what opens us up and comes alive.” In essence when we ascribe to this Don’t Know Mind we are freeing ourselves of the incessant thoughts where we attempt to rationalize and understand those things and/or individuals we just don’t seem to “get”. So when I think about the above referenced quote by Eckhart Tolle, I am reminded of the fact that it’s okay to not know. In fact, not knowing can be a peaceful place if we embrace it. Take this for instance, “What we know blocks the truth. Returning to not knowing opens us up” (Zen Master Bon Soeng).

And the convergence of these ideas opened me up to a clever technique for freeing myself of my incessant desire to control, wanting answers and/or solutions to things I toil over in my mind. On the morning of July 12 I had an epiphany. I purchased, and later decorated the exterior of, an empty craft box from my new favorite store, Michaels. This box has become my IDK (I Don’t Know) Box. The box is symbolic because it represents this new approach to thinking (or in my case, the absence of thinking). Inside the box I have placed small slips of paper where I write down things that my mind would love to ruminate on, things that would literally drive me crazy because I want to find an answer for them. But not any more! My IDK Box serves as my release from the chains of my ever-“thirsty” ego. Yep! There is that dastardly ego again; the ego I’ve been trying to Le’Go. At any rate, once I’ve written down the idea I have literally and figuratively given it over to God and the universe to solve. A wise young man recently told me that I am not in control, that there are things in life that are out of my hands. When he told me this I looked at him with bewilderment and disbelief. In my mind I thought, This is my life! Of course I have control. Sad, but true; he was telling me the Truth. Undoubtedly, there will be events that occur to us that seemingly make no sense. But their not making sense doesn’t discount or lessen their impact on us. And for these, and perhaps other reasons, the easiest, and most practical approach to freedom and the opportunity to truly live in the moment, comes when we throw up our hands, not in defeat, but in surrender, and proclaim: “I Don’t Know!” 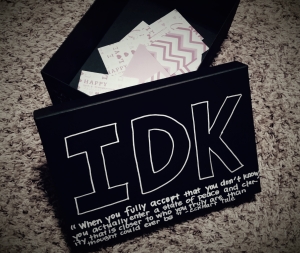 If you see someone on the street wearing a black t-shirt with the letters IDK (in white) plastered across the front, it just might be me. And I’ll be proudly sporting three of the most important letters in the English alphabet.